On Saturday 14 October, I had the privilege of being invited to the Blessington Retailers Convention. Blessington is the parent company and distributor for some of the most well known sewing companies in Australia, including Singer, Husqvana, Pfaff, Handi Quilter and AccuQuilt.

I was invited to take part in two classes held during the day, offering me the rare opportunity to play with some of latest toys on the market, including the Husqvana Designer Jade 35.

I think it can be safely said that I am a Husqvana girl at heart. My machine in an entry level, mechanical Husqvana and I have a Husqvana overlocker to match. So, needless to say, I was incredibly excited to get my hands onto the Husqvana Designer Jade 35, and let me tell you, it didn’t disappoint. Upon entering the room, we were greeted with rows of neat white and green packages. We approached them, dubiously in my case, wondering what we were in for once we sat in front of the machine. We were given a quick introduction and a run down of what the Designer Jade 35 was. It is an entry level embroidery machine, designed to make machine embroidery and sewing accessible to a whole new generation, and one of the best things? It is designed to fold up neatly for easy storage. With the Husqvana Designer Jade 35, everything (foot pedal, pressure feet and accessories all pack away into the machine itself, making it great for those without dedicated sewing spaces.

It has a whole list of features that are designed to make using the Jade as easy as possible:

After the introduction, my curiosity was significantly peaked and I was keen to start. To put the Jade through it’s paces, we were provided with all of the bits and pieces required to make an Owl Sewing Buddy, a project based on the Husqvana Owl sewing project found on the Husqvana website, and the required embroidery designs were preloaded onto the machine.

As the Jade only has a smallish monochrome display, all embroidery designs are created using PC software rather then being made on the machine itself. This can be a bit of an inconvenience, however, as it is an entry level machine, I figured that it was to be expected. The stabliser we used for this step is called Inspira Clear n Melt.

I loaded up some fancy clear stuff into the embroidery hoop, popped my fabric on top and selected the preloaded design and happily hit start (and by all of that I mean that the instructor showed me how to put the stabiliser in the hoop, I was doing to backwards, showed me how to position the fabric and made sure it was in the right place, then showed me how to select the design, but if anyone asks, I did it myself! … Thank you, Mandy.)

This was my first ever machine embroidery and I felt like the Designer Jade held my hand reassuringly the entire time. It may have been a combination of the instructor and the ladies next to me making sure that I didn’t mess up too badly, but regardless of that fact (they really were super helpful) I felt oddly comfortable with this gorgeous machine and I was ready to make beautiful things together. This is my first ever machine embroidery and I LOVE it!

I was suitably impressed with how quickly it stitched out the design and I loved watching the stitch counter tick towards zero. This piece was destined to become some fancy emblishment for a little pocket we would sew onto the owl’s belly. My very first piece pf machine embroidery in all of it’s glory. It has been sewn onto a piece of fabric and turned out to be used as a pocket.

Once the lace was done, we were required to stitch out two other embroidery designs for our quickly forming owl. This included a large geometric thingy on a rectangle for the wings and a funky shaped piece of felt for the owl’s face. The quality of the stitching and the detail of the design was definitely impressive. The Designer Jade does such great quality embroidery, with amazing detail in the stitching. The machine did the outline stitched and the decoration around the owl’s eyes. It also sewed the beak on!

If you are anything like me, you’re going to loathe sewing buttons on. I generally do everything I can to avoid sewing them on. You can imagine my delight (horror) when I realised that this owl had buttons for eyes! I could hardly wait (I considered hiding in the bathroom). Turns out that this magical machine can do it for you!! True, you have to line it up and make sure its positioned correctly, but I’d take that over stabbing myself with a needle any day! I had both buttons sewn on in a matter of minutes, and done so with very little cursing!

Sewing buttons on takes a matter of seconds!

Now that we had finished with the embroidery and starting to construct the owl using the Designer Jade 35’s sewing functions, I felt much more in control and confident. I sewed up the pocket really quickly and sewed together the wing pieces to be turned out.

I shouldn’t have gotten cocky.

While I was admiring my handy work and thinking that they came together so nicely, I happened to note that I have actually sewn one of the wings together backwards. Unfortunately I didn’t have time to finish my owl as I had to (reluctantly) leave the class early.

Thank you so much to Blessington for this oppotunity and giving me the chance to find my true mechanical soulmate. 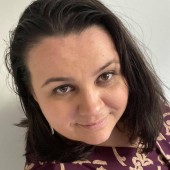