Over the next few months I’ll be doing a series of interviews with Australian and New Zealand based pattern designers! We have some serious talent around these parts so I’m super excited to get into it! Gail Couch, owner and designer for Flosstyle, was my guinea pig, and I’m forever grateful to her for starting us off.

Gail Couch took over Flosstyle in February of this year. She strikes me as kind, warm, intelligent, curious and incredibly busy! When asked how she copes balancing small children, a husband, paid work and Flosstyle, she responded with something very relatable to many of us, “apparently I don’t sleep!” she said, laughing. ‘Once the kids are in bed I’m up until eleven most nights, sewing and computer stuff, there’s a lot of work that goes into it behind the scenes. I get like five emails a day from people saying they’ve lost a pattern, can I please send it through.’ Gail Couch and her youngest using the Flosstyle Kanga Carrier

Our conversation moves towards her take over from Flosstyle’s former designer, Jess Turner. Towards the end of 2016, it had been announced that Flosstyle would be closing shop forever. There was a natural outrage amongst Flosstyle fans, which caused Jess to reconsider. “Most people stayed loyal to the brand, about 100 left the Flosstyle Fair Facebook group thinking it was all over,” says Gail. “Most people were just happy that it was still going and that there would be someone to answer their questions.  I think a lot of people have learnt to sew via PDF patterns, so they’ve got a lot of beginner questions. Most people were happy to have support back. But, I still get the odd person going ‘oh, where’s Jess?'”

Since Gail took over the Flosstyle Fair group it has grown to over 5,000 members, a wonderful achievement amongst indie pattern designers. She told me that while most of her customers are Australian based, some of the new group members are coming from the United States. Flosstyle will be remaining true to it’s roots, “There’s not going to be forth of July sales,” she says. Gail Couch and her oldest son

Gail sews on a Brother Innovis 600. It’s a domestic machine which has proven to be worth its weight on gold, “It pretty much sews anything. I have an Aldi overlocker, and I love it! I’m thinking about getting a second so I can have one for white and one for black. I desperately want a coverstitch! Oh, and I have a vintage singer too, just one from the 1980’s.”

I asked her if she was currently working on anything, “I don’t do any fun sewing, but my seven year old wants me to sew with him so we started sewing a pair of shorts on the weekend.” When asked if she had a favourite Flosstyle pattern, she said “Umm, can I say one of mine? Ha ha ha, no, probably the Ultimate Bucket Hat actually. It’s great for everything, useful for me for my kids and it’s my go to birthday present. Everyone can always use a hat.” The Ultimate Bucket Hat pattern is very highly recommended and highly regarded amongst sewing groups.

I asked her about the release date for the upcoming baloo wallet. “Never!” she laughs again, “I feel like that pattern is cursed. I’ve been through three computers trying to get it out, they’ve all died. The fourth one is sitting there waiting for my husband to set it all up.” I asked Gail what is next for Flosstyle. She was much more optimistic about the future of Flosstyle than the baloo wallet! “My oldest is right at the end of the sizes so I was thinking maybe an older version of sprouts and splitting it up into boys and girls. But I really want to do some vintage baby! And then maybe some ladies stuff as well. I’ve got a batwing shirt that I made for me, but you know, drafted for me is not drafted for everyone!” she laughs.

“I get bored if I’m not doing stuff,” says Gail, “I don’t know how to sit still and do nothing.” I questioned whether sewing was a relaxation thing for her, “not really, no. I have to be doing something and I have to know how things work. I have to do it, I have to know how it works. I started sewing when I was about 12 and I was living with grandma, and she was sewing and she’s taught me to sew so I can hand embroider and hand sew, and cross stitch and long stitch. Anything crafty, I’ve kind of had a go at. I like sewing because what you create is very practical, useful and logical. Sewing let’s me be creative while creating something practical. My kids can wear the clothes I make them.” To finish off our interview I asked Gail if she had a tip or favourite tool to share with us. “My favourite sewing tip: Always thread the machine with the pressed foot up! It can save a lot of hassle, helping to make sure the thread is properly between all the tension discs. My favourite sewing tool: My rotary cutter or my glue pen, both are life changing if you haven’t used them before and once you have you will wonder what you did without them!”

A big thank you once more Gail Couch, the owner and designer for Flosstyle! I’m very much looking forward to doing more interviews. If you have an Australian or New Zealand based designer you’d love to learn more about, let me know! 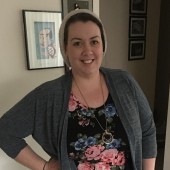 Hey! I'm a Mum of one little girl and wife to a photographer hubby. I'm a chef and a sewing enthusiast. I have been sewing for over fifteen years. About a year ago a got back into it in a big way and haven't stopped since! I enjoy sewing anything really - clothes for me, Bub, hubby, or anything we need for the house.